This week I’m taking a look at the new range of luxury vibrators from Swan, the Canadian company behind the highly-regarded Leaf vibes (one of which I must get at some point). When a PR company got in contact with me recently and asked if I’d be interested in reviewing one I was happy to oblige.
The Swan collection is primarily aimed at women, though they do have a few products which would be suited to unisex use, such as the Tundra, the Mute, and the Trumpeter. I ended up receiving the Silver Swan, which as you can probably tell is your more traditional rabbit-style vibrator. I was a little apprehensive at first because of this fact, and worried that the review might end up being a little out of my comfort zone, but like all good stories there is in fact a twist, and later on I shall endeavour to explain why this toy is also rather man-friendly.
You may be thinking that you’ve seen this design somewhere before, and that’s because in North America the whole collection is under licence to Jopen for their Vanity range. The only difference is that the Swan collection comes in fuchsia while the Vanity range is purple. The Silver Swan corresponds to the Vr3 for anyone who may be wondering. 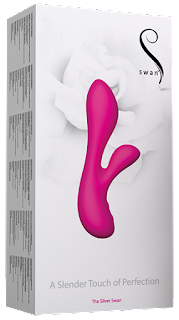 I thought that for a change I’d start by looking at the packaging for the Silver Swan. Normally packaging only forms a cursory footnote in my reviews, but with a high-end luxury product such as this the packaging can almost be as important as the toy itself for some. The box for the Swan certainly sets the bar high from the outset with its design, which is always a welcome sign. It’s constructed from a heavy duty cardboard, and by “heavy duty” I mean that it’s as thick as the binding of a hardback book. It feels reassuringly solid and sturdy, almost like a trinket box which someone might leave out on a dressing table. The exterior of the box is almost completely glossy-white in finish, with the exception of the two ends which have information printed on them in small black text, and the top of the lid where a photo of the toy stands out against the white in its bold fuchsia hue. The name of the product and the company logo are printed alongside the photograph, so it’s not the most discreet box in the world, but it certainly is tasteful, and in a way which elegantly normalises vibrator ownership.
The lid of box is a hinged flap held down by magnets hidden under one of the sides, so it’s nice and easy to get into time and time again. The interior is lined with a sultry black paper, and gives off that unmistakable scent of ‘newness’ as soon as you open it. Inside the box you’re greeted by a black cardboard wallet which houses the square white instruction manual, and below this you’ll find the vibrator itself, the power adaptor, and a storage pouch, all sealed inside cellophane bags. The quality and presentation of the packaging is really impressive, especially if you’re buying it for someone as a gift, as they’ll really feel like they’re being treated to something special. It’s also a nice little box to keep to store things inside, whether it be the vibe itself or something other, and the plain white faces mean that it could be discreetly slipped onto a bookshelf.
The vibrator itself is really a lovely toy to behold and an expert piece of craftsmanship. It’s moulded out of one continuous piece of body-safe 100% platinum silicone, and features an ever-so-soft velvety matte finish. The toy is described on the box as being “virtually-seamless”, and while it does have a raised seam running the full length of the body, it’s quite subtle. You can see the seam and feel it with your fingers, but it feels soft like the rest of the toy, and isn’t pronounced enough to be felt inside the body during use. As well as being safe and completely odourless, the non-porous silicone coating protects the electronics inside the toy and makes it completely waterproof. Not only is it safe to wash the toy under the tap, but it can also be fully submersed and used underwater in a bath or hot tub. The entire Swan range is available in only one colour, a rather bold fuchsia which I find quite attractive, but if you’re not into the more pink range of the spectrum then it may hold less appeal. 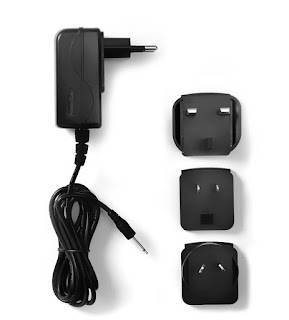 The Silver Swan is a rechargeable vibrator and features one of the most ingenious power adaptors that I’ve encountered with any sex toy. The charger comes in two separate parts: there’s a transformer connected to the power lead which plugs into the toy, and then there’s a selection of different prongs which clip onto the transformer, depending on where in the world you want you use it. There are four different attachments in total, one for the UK, Continental Europe, Australia / New Zealand, and North America / Japan. Each of the sets of prongs clips on really firmly to form a secure unit, and it’s a simple button push to pop them back off again and switch them. For added peace of mind the button is located in a position where it can’t be pressed while the charger is plugged into a socket, so there’s no chance of accidentally separating it while live current is flowing. The design is convenient in two ways, firstly because you can buy a Swan product anywhere and know that it’ll work when you get home without the need for adaptors, and secondly because you can customise the charger when you’re planning to travel abroad on holiday. The other great thing about the charger, which may strike you as insignificant initially, is that it actually has “Swan” printed on it. For those of us with a number of rechargeable toys, being able to identify which charger amongst a drawer-full goes with which toy can be a godsend.
When in use the charging cable plugs into the back of the toy through a water-resistant seal, and a light in the handle illuminates to indicate that the battery is receiving power. It takes around 3 hours to do a full charge initially, after which the light will extinguish to signify that charging is complete.
As I mentioned at the top the Silver Swan does come with its own storage pouch, which is lovely if you just want to keep it in a drawer by the bedside instead of in its box. It’s a 10 1/2″ x 6″ black drawstring bag made of a shiny satin-like fabric, and with the Swan logo printed on one side. Like many sex toy bags it’s very spacious, by which I mean oversized. There’s room enough in there for the vibrator, the charger, even the little cardboard wallet with the manual, and probably several other toys too. I’ve never quite understood why they make these bags so large; it’s almost like something from a magician’s kit, only you’re pulling out a different kind of rabbit… It is a very good quality bag, however, so you won’t be endlessly pulling stray black threads off your toy. I’m a big fan of companies which include storage pouches, so kudos to Swan. My only minor niggle, and this is strictly a matter of preference, is that I would have liked to have seen a white bag instead, like the ones used by We-Vibe. The fuchsia contrasts so nicely against white on the outside of the box, that I would have liked to have seen this mirrored with the pouch.

When it comes to caring for your toy you’re just going to want to wash it gently with some antibacterial soap and warm water, and you may wish to do this both before and after use, as like any silicone it does attract dust with a special prowess. If you’re sharing the toy then it can be sterilised by wiping it down with a mild 10% bleach solution. Things not to do with the toy: don’t boil it as this is likely to damage the electronics, and don’t use a silicone lubricant unless you’ve performed a patch test and are confident that it’s safe.
Overall I’d have to say that the design and build quality of the Silver Swan are truly exceptional. It really does have the look and feel of a luxury product. In terms of performance it truly is lovely to use, but I’m left feeling that it’s probably slightly better suited to a woman. As much as I love that squeeze against the perineum, and the intensity of the motors, when I’m looking for a specialist anal vibrator I like just a little more rumble and some patterns to choose from, and there are specific prostate massagers which do that job better. It’s undoubtedly a fantastic product, and in the right circumstances I wouldn’t hesitate to recommend it. As a shared his-&-hers toy I could see it being ideal, as from a male perspective it’s definitely of a high enough calibre as a prostate toy, and while this may seem terribly presumptive, I can’t imagine a female partner not enjoying what it has to offer, but feel free to take that last statement with a pinch of salt. Swan is unquestionably a company which I’ve been left with a lot of respect for, and I’m pleased that I had the opportunity to test one of their products.
If you’d like to buy the Silver Swan, and indeed the rest of the Swan range, then they’re available from Simply Pleasure in the UK, as well as other fine retailers. 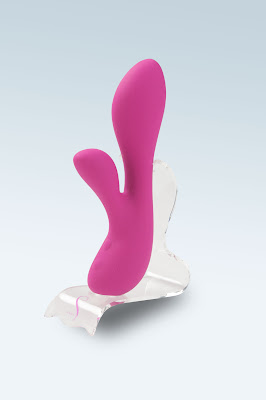