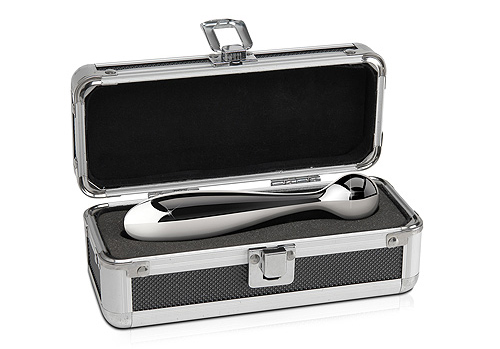 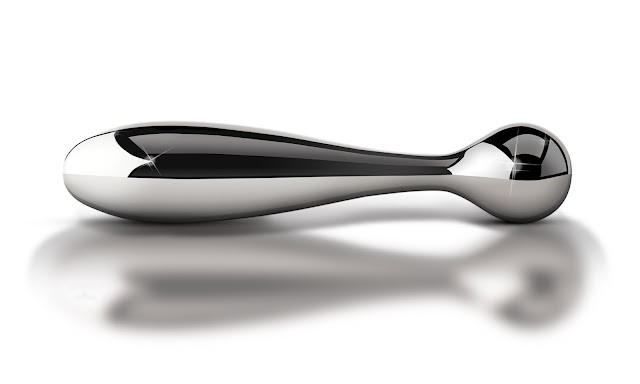 The problem I have with the toy is that it does nothing, or rather the shape does nothing for me. It’s possibly one of the least stimulating toys I’ve ever used. The first point to make is that it’s not at all filling. It’s a slender toy so that’s to be expected, and a beginner might appreciate it, but there’s no sense of a stretch in the muscle, nor of a substantial presence inside the body. The second point is in its name. It’s called Mr Smooth, but it’s too smooth; it practically ninjas its way in and out of the body without you feeling a thing, and I like to get some sort of sensation from my toys. The third point really comes down to its shape. It’s hopeless for prostate stimulation; the end isn’t bulbous enough to properly hit the prostate, the shaft has no curve so you have to manually attempt to angle it yourself, and when it’s fully inserted the end completely misses the prostate anyway due to the length of the toy. I really can’t figure out what to do with it; thrusting gets me nowhere, wearing it like a plug isn’t especially exciting, and so I’m left with something rather bland that simply bores me. As strange as it may sound, I wish that I could like it more, simply because its such a lovely sculptural piece. It looks good in its case, it feels nice in my hand, but functionally it’s a disappointment.
One of the best features of the dildo is how well metal conducts heat, which naturally makes it perfect for temperature play. In this regard it is many times better than glass, which is another popular material for this. Just picking the dildo up at room temperature will give the impression that it’s already cold, which is fantastic if you’re into low temperatures as it reduces the need to wait while it chills in the fridge. If cold isn’t your thing then simply holding the plug in your hands for a few seconds will be enough to bring it up to a more comfortable temperature. Personally I love the feeling of a cold toy as it slides into the body, and find the sensations nothing short of amazing. The only downside is that the cold feeling doesn’t last long, as the metal quickly sucks the heat out of the body and becomes quite hot to the touch. To deal with this it’s handy to have a bucket of ice water nearby, as a quick dunk in there will have the dildo back down to frigid temperatures in no time. Similarly if you like your temperature play at the other end of the spectrum, a dip in a basin of hot water will also do the trick.
The dildo is very easy to clean as metal is a highly durable and non-porous material which is able to be sterilised. You can wash it with antibacterial soap and hot water, wipe it down with a 10% bleach solution, or boil it in water for a couple of minutes. Just be sure to dry it thoroughly when you’re done, as the packaging only specifies that it’s steel, and not stainless steel, so there is the potential for rusting if you’re not careful. One other thing is that metal does show up fingerprints, so depending on how fussy you are you may find yourself polishing your butt plug before putting it away.
The Mr Smooth is a really lovely toy to look at, but unfortunately for me I just found that the design felt quite boring. I look for a toy that’s going to really stimulate me and keep me coming back again and again, but sadly this doesn’t seem to be the one for that. In terms of quality I could definitely recommend it, but if you want a good metal plug then I’d suggest the Teazer, if you want prostate stimulation then go for the Curve, and if you want something interesting to thrust with then I’d look into the Slim Fave. I can only really conclude that as an anal toy the Mr Smooth has quite limited potential, though if anyone does get enjoyment from it this way then I’d love to hear about it.
The Metal Worx Mr Smooth is available from these fine retailers: