The A-bomb is one of the larger butt plugs that Tantus makes, and with a whopping 8″ circumference there’s no question that this is a plug for the more advanced user. With regard to length the plug is more traditional at 5 1/2″ long, and with 4 3/4″ of that being insertable, so you only need to worry about challenging yourself in one direction.

You can see from the photo above and to the right how the plug got its name, as it does resemble one of the nuclear bombs dropped towards the end of the Second World War, known as the “Fat Man.” Unlike most butt plugs which have a conical design, the A-bomb is distinctly ovoid, or egg-shaped, with the widest point being right in the middle, nearly halfway between the tip and the base. This quirk of the design means that it’s not a training plug; if you intend to use it then you need to know that you can already take its size, or at least take something very similar, because if you’ve never had anything bigger than a 2″ wide plug inside you before then you can be certain that this won’t be going anywhere.
The A-bomb is a very solid and heavy toy due to the amount of material that it’s made from. Like all Tantus toys it’s made from 100% platinum silicone, which is completely odorless and body safe, and it’s been manufactured in a single piece to avoid mould-lines. The plug feels slightly more firm than a lot of Tantus products, with less give in the surface, but when you consider how much of a stretch it’s going take to use it, having some squish in the material wouldn’t be practical in contributing to comfort in the way that it is with other products. The shape and thickness of the toy also naturally makes it inflexible in all areas other than the base, but the base is still appropriately sturdy. The finish on the A-bomb is velvety and soft, as opposed to smooth and shiny. This ever so slightly matte surface is a real benefit when it comes to holding lube, as you can easily spread an even coverage, and not have to worry about streaking and dry patches.
Using the A-bomb is one of those instances where a warm-up toy is a necessity. I like to start off using the Super Big End which is slightly smaller than the A-bomb at its widest point, but which has that traditional conical shape that’s needed to slowly and gently open the muscle. Once you’ve laid the groundwork with your warm-up toy it allows you to get a good portion of the tip of the A-bomb through your now-relaxed muscle, so you can start working on getting the rest inside. This will require a good thick anal lubricant, and a suitable position to work in. I find that squatting over the plug and lowering the weight of your body down onto it is the best way to gradually ease it inside you. Once the sphincter slips past the widest point it’s smooth sailing and you’ll easily lower yourself right down to the base. The shape of the plug creates the most intensely full sensation when it’s inside you, as it places the widest point much deeper than you might ordinarily expect. Although the plug lacks what you might consider as a separately-defined neck section, this has no impact on how the plug functions inside the body and it stays put extremely well, with no risk of accidental slippage. The circumference of the plug just above the base measures 5 1/4″ around, so while this is a significant reduction from the 8″ above – enough to allow the muscle to relax – it does still keep the sphincter stretched to a pleasant degree. Thankfully the plug is also easy to remove, as considering its size it’s not something you’d want to get stuck in place. The shape on the way out is almost the same as on the way in, so you experience the same gentle dilation of the muscle, instead of a big leap from a narrow neck to a wide bulb. This also enables you to slowly squeeze it out of the body, rather than having to pull it out with the base, almost as though you were laying an egg. This can be a beneficial process during the first few times that you use the plug, while the body still isn’t used to the size, as you can carefully stretch the muscle both when you insert it and when you expel it, and repeat as often as you like. 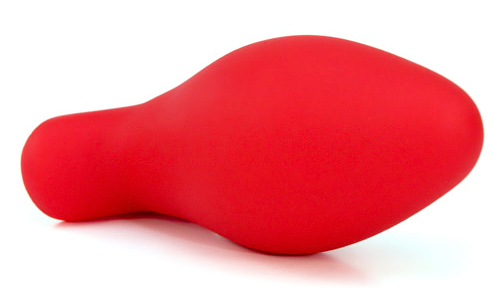 One of my favourite features of the plug has to be its base, because of how small and discreet it is. It’s wide enough to allow the plug to stand up on its end, and to ensure than the toy is completely safe for anal use, but at the same time it belies the true size of what you’re wearing. While the plug is inside the body all you can see is a small  3 1/4″ long by 1 3/8″ wide strip of red silicone nestled between the buttocks, and it feels incredibly comfortable. As it’s narrow and both ends are rounded off it’s very unobtrusive, allowing you to freely walk around almost as though nothing were there, and without anything uncomfortably poking into the cheeks. This is perfect if you intend to wear the plug for extended periods.
The A-bomb is very easy to clean after use. Like any toy it can simply be washed with anti-bacterial soap and hot water, but as it’s silicone and non-porous it’s also able to be sterilised. This can be done by popping it into the dishwasher, wiping it down with a 10% bleach solution, or by boiling it in a pan of water for a couple of minutes. When caring for your silicone plug it’s also important to only use water-based lubricants.
The A-bomb comes in Tantus’s standard tasteful packaging, consisting of a clear plastic box with some useful information printed on the side, and an unobstructed view of the toy within. You could use it to store the toy in, but as it’s a little bulky a nice pouch would be better suited.
Overall I really love the A-bomb, but it’s not at all for the faint of heart. If you appreciate the eye-wateringly larger toys then you really can’t get a better quality butt plug in this size.
You can buy the A-Bomb directly from Tantus, as well as SexToys.co.uk, and ThatPosition.
Tweet
Pin