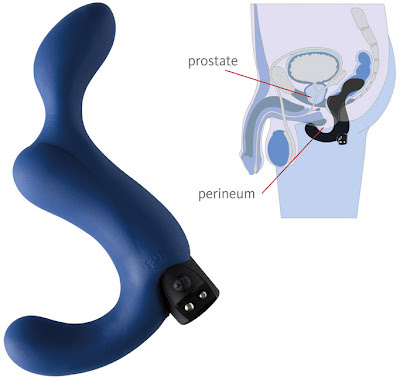 The Fun Factory Duke is a prostate massager that I’ve had my eye on for a while; I really like the idea of a wearable prostate massager and perineum stimulator that can be used hands free, but I haven’t had much luck with similar products such as the Rocks Off Bad Boy, so I was eager to try out the design of the Duke.

The Duke Comes inside a lovely presentation box made from cardboard, and which also features a clear plastic viewing window at the front. For some reason when I opened mine it was very dusty inside, with particles stuck all over the silicone of the toy which appears to attract this.

Overall I have to say that I’m rather disappointed with the Duke due to the high hopes that I had for it. In my opinion it’s probably the best toy of this design, and in this price range, and I would definitely recommend it to anyone over any of the Rocks Off toys that I’ve tried, but objectively it still isn’t that spectacular. I really like the creative thought and innovation that Fun Factory have put into this toy, but it just has some flaws which need ironing out.
If you’d like to try the Duke then you can buy it from these fine retailers: