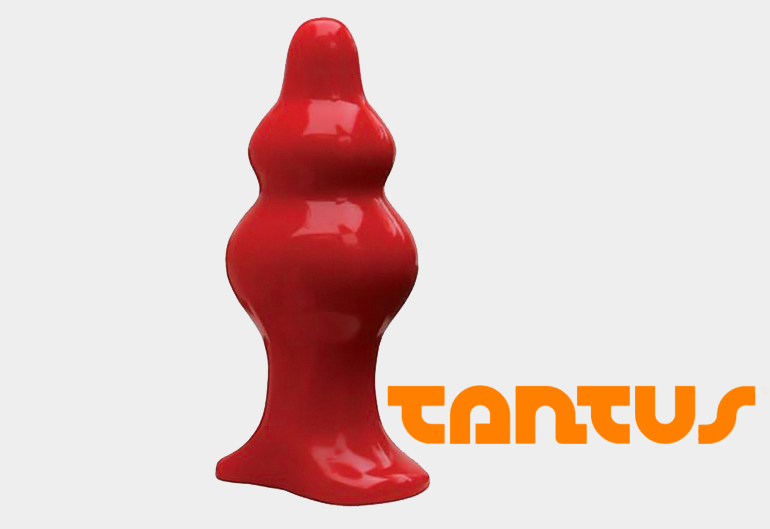 The plug is constructed in a single piece from the same high-quality premium platinum silicone that Tantus use in all of their toys. There are absolutely no mould-lines to be found along the smooth shiny surface, and the plug is completely without odour. Tantus silicone is without a doubt one of my favourite materials; it has a nice degree of flexibility in it, as well is some give in the surface, allowing you to bend it about and squeeze it with relative ease.

The tip of the Severin features a small rounded protrusion, like a nipple, which is less than an inch wide. From there it broadens onto the first bulge which has a moderate 4 7/8″ circumference, before briefly narrowing again into a shallow groove, and finally finishing with the second and largest bulge. The underside of the final bulge is completely rounded, just like you would expect to find on the bulb of any typical plug, and it gently joins onto the neck. The neck of the plug has a nice 1 1/4″ width, which is small enough to allow the muscles to relax after passing over the widest point, but which is also wide enough to provide pleasant degree of stretch while wearing the plug for extended periods. The neck is around 1 1/4″ long, providing a good amount of space between the bulb and the base for the sphincter to rest along, meaning that the bulb will be held securely in the body, and not left half hanging out. The base of the Severin is similar to the Tulip in its hourglass-shape, but it’s slightly more comfortable to wear as the corners are rounded, thus avoiding any pointy bits which might dig into the skin. It’s nice and wide at 2 3/4″, giving the reassurance that its perfectly safe for anal use. The only flaw I can find in the whole toy is that the base is a little thin and on the floppy side. It’s not a huge issue, but when I’m tugging on a plug during use I like to grasp something a little more substantial and less liable to bend. It would probably only take an extra 1/8″ of material there to strengthen it sufficiently.

The narrow tip of the Severin makes the first step of insertion seamless, and it slips readily inside helped along by its smooth surface and a little lube. Almost immediately you encounter resistance as you hit up against the bluntness of the first bulge, but provided you’re sufficiently relaxed it should be quite easy to insert that as well, and you feel a bump and a “pop” sensation as the muscle slides over it and comes to rest in the groove below. The next bulge mirrors this experience, only now due to its size you’ll begin to feel a pleasant stretch in the muscle as it expands over the widest point, followed a larger “pop” as the plug gets sucked inside. For some people the second bulge may present a challenge, so it can be handy to have a regular tapered plug with you as a warm-up toy, just in case. The bumpy texture of the Severin is what sets it apart and makes it that bit different and more interesting to insert than your typical conical plug. Feeling the muscle  noticeably bumping over each ridge is quite pleasurable, and it can be fun to slip the plug in and out, as though you were thrusting with it. Once the plug is inside it’s very comfortable to wear; the ergonomic shape of the base nestles between the cheeks of the buttocks, and the soft silicone of the neck acts like a cushion if you squeeze against it with your muscles. Because of the size of the plug it feels pleasantly filling while you’re wearing it, but not overly so. It’s a nice plug to wear for extended periods, and after a while you might even begin to forget that it’s there as it starts to warm up to your body temperature. The ridges of the Severin nestle up against the prostate, but while you can feel it there I didn’t find it to be especially stimulating in this regard. Once you’re ready to remove the plug it’s a nice simple affair; the rounded underside of the bulb allows the sphincter to slowly dilate without discomfort as you pull on the base, and once you’re past the largest bulge it’ll slip right out and you’ll feel the bump of the next bulge on the way.

The plug is very easy to clean after use. Like any toy it can simply be washed with anti-bacterial soap and hot water, but as it’s silicone and non-porous it’s also able to be sterilised. This can be done by popping it into the dishwasher, wiping it down with a 10% bleach solution, or by boiling it in a pan of water for a couple of minutes. When caring for your silicone plug it’s also important to only use water-based lubricants.

The Severin comes in Tantus’s standard tasteful packaging: a clear plastic box with some useful information printed on the side, and a clear view of the toy within. You could use it to store the toy in, but as it’s a little bulky a nice pouch would be better suited.

I’m a big fan of the Tantus Severin and can happily recommend it to anyone who can take the size. It’s well built from a lovely material, and has a fun shape which both looks and feels good.