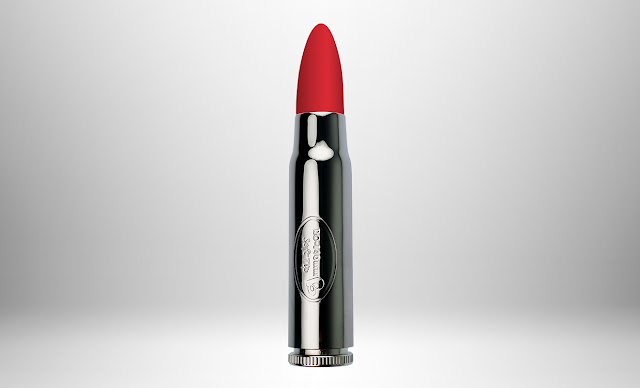 The RO-140mm is the big brother of the RO-100mm and features a similar design, only it’s that little bit larger, and has 7 functions as opposed to 3. The RO-140mm is very much the Goldilocks of Rocks Off vibrators as far as I’m concerned. I wasn’t that keen on the little RO-80mm, nor the big RO-160mm, but the RO-140mm is just right.
The RO-140mm has a very distinctive design that’s modelled after the cartridges used in assault rifles such as the AK-47. It’s actually quite impressive how closely they’ve mirrored the form, even down to the appearance of the screw cap for the battery compartment. Personally I rather like how Rocks Off have taken the idea of the “bullet” vibrator and actually designed some of their products to look like munitions.
The vibrator feels as though it’s very well-built and durable, and has a nice weight to it in the hand. It’s constructed largely from plastic that’s been coated to give it a metallic finish. Admittedly it’s not my favourite of techniques but the coating seems to have been done well, and is even present inside the battery compartment. Overall it presents a nice appearance, and I think it was probably the right choice for this particular toy as it contributes positively to the look that’s being aimed for. The plastic body of the vibe is 4″ long and is topped with a 1 1/2″ long silicone tip which is available in a variety of colours. The silicone is lovely and soft and velvety, to the point that it glides across the skin with little friction or drag, and without the requirement of lube. The silicone is reasonably firm but it has enough flex in it that it gives when you apply pressure to the skin with it. The tip is secured very solidly to the plastic body, and I’d be hard pressed to imagine any dirt getting into the joint as it’s so tight. The body has a circumference of 3 3/8″, the same as the RO-120mm, which I find is a comfortable size to hold in the hand while using; it’s like a chunky whiteboard marker. The tip, by comparison, has a circumference of only 2 1/2″, which is a nice size if you want to cheekily probe any bodily crevices with it. The base of the toy has a screw cap where you access the battery compartment, and this is sealed with a rubber o-ring to make the toy completely waterproof. The only downside that I see here with the design is in the groove that runs around the screw cap, as water can easily sit in there and be missed when drying the toy. If you were to unscrew the cap to remove the batteries while water was present there then it would drip inside the toy, so you need to be careful. Hidden underneath the cap is the button to operate the toy; it’s a simple push button and feels pretty sturdy, but what I like about it is the placement. Recessing the button so it can’t be seen makes the design more sleek, and also enables the RO-140mm to be stood on its end when you’re not using it.

The RO-140mm is operated by pressing the button once to turn it on, again to change the function, and by holding the button down for a couple of seconds to switch it off. The motor for the toy is located at the end of the plastic portion, but despite this the vibrations can actually be felt most strongly in the silicone tip, which is precisely where you want them to be. The vibrations become strongly focussed right at the very point of the tip, and I was impressed by this. One of my major complaints about the RO-160mm was that the vibrations didn’t come to a focal point anywhere, but happily the RO-140mm has remedied this. This focus means that you can precisely target stimulation just where you want it to be, with pin-point accuracy. The vibrations are very buzzy and high-frequency and only become more so as you cycle up through the 3 power settings. Normally I’m not a fan of buzzy vibes, but oddly I find that in this instance it works for me. Just gliding the soft silicone tip all around the penis provides this wonderfully soothing feeing, as well as a satisfying level of sexual stimulation. It’s both relaxing and teasing: you can sense that it has the ability to take you where you want to go – and you may wish to jump ahead to that point – but it’s going to do so at a gentle pace, allowing you to enjoy the prolonged journey. Running the tip up and down the underside of the shaft and around the corona of the glans is very pleasurable, and the soft silicone is even gentle enough that you can run it along the meatus without causing discomfort. The key area to focus on, especially when you’re ready to orgasm, is the frenulum. The RO-140mm stimulates this nerve-rich tissue exceptionally well, and moving the tip up and down it and along either side of it will have you or your partner reaching orgasm in no time. Another place where the RO-140mm can be used is externally with the anus. I found it quite enjoyable to just make circles around the outside of the sphincter, and then to occasionally press the soft tip into the centre to create the sensation of someone thrusting with their tongue. Personally I wouldn’t insert the RO-140mm: it wasn’t designed for this, it doesn’t have a flared anal-safe base, and I just don’t think it would be that worthwhile in terms of pleasure gained.
The vibrator has 4 patterns to choose from as well as its 3 power levels. Three are very rapid series of pulses, with slightly differing timing for the lengths of the pulses and the pauses in between, and the other is a slow ramping up of power. Normally I’m a big fan of patterns, but I’ve found that with buzzy vibes they don’t really do much for me, and that I prefer the constant setting. Of the four patterns though, it’s the slow one which I like the most, and actually find to be equally as pleasurable as the constant vibrating. Using this pattern can be nice just to add a little variety, or as an alternative to physically moving vibe as you’re using it. The slow pulses almost mirror the feeling of moving the toy along the skin, which can be handy if you want to feel two types of stimulation, but while holding the vibe completely still and focussing on one area. Personally I would have preferred a little more selection in terms of the patterns as three of them are quite samey, or even the option of a rumbly vibration, but on the whole I’m pretty satisfied by what’s offered.
The noise level of the RO-140mm is quite low and just sounds like a hum or a fly buzzing around. I’d feel comfortable using it whilst knowing that someone was in the next room, with the peace of mind that they’d be unable to hear it.
As the toy is waterproof you can use it in the bath or shower, but when I tried this I wasn’t keen on it. When everything gets wet it causes the silicone tip to really drag instead of gliding smoothly over the skin. Obviously the way to counter drag normally would be with lube, but in this case you don’t really have any options. If you use a water-based lube it’ll just wash away, and you can’t use a water-resistant silicone lube as it might damage the silicone tip. If you only want to use the vibe for pin-point stimulation then it should be fine in water, but if you want to move it along the body then it’s not the best choice for that.
The vibrator comes in quite simple packaging unlike a lot of other Rocks Off products. It slides inside a clear plastic tube the same shape as the toy, making it very compact. I like it because it makes a great place to store the toy when you’re not using it, and it won’t take up a lot of space inside your drawer or even luggage. Included with the toy are 2 N batteries which it runs on, and which are easy to find in most shops when you need to replace them.
Overall I really think that the RO-140mm is a great vibrator; it’s the first toy from Rocks Off that I can recommend without reservation or hesitation, as it actually got me off in a way that the others I’ve tried couldn’t. It manages to combine both form and function with its funky design and stimulating functions, and is probably the best vibrator I’ve tried at this price point.
You can buy the RO-140mm from Bondara
Tweet
Pin