This March saw the debut of Fleshjack’s newest product, the Flight, and the people over at Lovehoney asked me if I would test it out for them, and of course I jumped at the chance! Having recently covered the Vortex, I’m dubbing this month Masturbator Madness, in honour of it all.
The Flight represents only the third major design variation in the Fleshjack case, following the Sex in a Can / Jack’s Soda and the Blade / Sword products. Aesthetically it’s a far more visually appealing product, resembling a designer Thermos or water carafe, as opposed to the standard torch appearance. The textured surface gives the plastic shell a more expensive carbon-fibre look, as well as providing grip when using the product. Dimensionally the Flight is a smaller product compared to the conventional Fleshjack, measuring in at a total height of only 8″ and 3″ wide, as opposed to 10″ x 4″. I found I preferred this more compact design, as it is less cumbersome, and also has a reduced weight. The base cap on the Flight is a little awkward as it is angled, meaning you can’t stand it upright on that end, so if you need to put it down at any point during use then you need to lie it on its side. As with other Fleshjacks, the base cap of the case can be loosened or tightened to adjust the level of suction inside the toy during use. Unfortunately as there’s no rubber seal around the cap, no matter how tightly you screw it down air will always leak in, and you won’t achieve a complete vacuum, but I found I experienced a stronger sucking sensation with the Flight than with other models.

The opening of the Flight closely resembles the design of the Pure, only with some grooves spiralling towards the centre, somewhat resembling the turbines of a jet engine. This has to be my favourite opening thus far; as it’s not as tight as the anal opening on the bottom models, it’s much easier to slip yourself inside without needing so much force. You gently glide in, as opposed to the pop you get with the bottom, which over all I found to be a more comfortable experience. As the opening is about half an inch wide, it’s very easy to apply lube to the inside of the Fleshjack , simply by squeezing a bottle or sachet over it. There’s no need to take any extra steps like you might with one of the tighter openings.

The official Fleshjack website states that the insertable length of the Flight is only 6″ long, which had me slightly concerned, but I measured it for myself and the internal length of the insert is in fact a mere shave under 7″, and statistically should therefore be suitable for 90% of the population. I found when using it that if I thrusted as deeply as possible, I could feel myself touching the end cap, but I wouldn’t describe it as problematic. There isn’t a lot of incentive to actually thrust that deeply, as the final inch of the canal is completely smooth, so you’re not missing out on anything if you don’t go all the way down there. The internal texture of the Flight has to be one of my favourites so far. Just inside the opening are some subtle bumps, followed by pronounced nodules, then the canal narrows to a tight point, which is followed by more nodules, and finally it finishes with a ribbed section. What impressed me is that you can actually feel each section individually, especially if you take it slowly to start with. The noduled sections are really good at stimulating all around the head of the penis, especially down the sensitive frenulum. As you move between the noduled areas you can feel the tight ring separating them, and a slight pop as you push past it. The way I would describe it is as an intimate massage for the whole penis; you really want to take long, slow, deep thrusts so that you feel each section, and get driven wild by the nodules tickling and teasing you all over. If you screw the cap down tightly then the individual sections become less obvious, but you get a deeper massaging feeling. The whole sensation feels so great that it’s almost a shame to reach orgasm, because the lead up to it becomes the best part, but when you finally do you’re guaranteed a strong climax. One concern I had was that because of the Flight’s smaller size, it might prove tighter than the other models, but gladly this wasn’t the case, and it can still happily accommodate a good girth inside.

As the inside is textured it does mean a larger surface area, which in turn means you’ll need slightly more lube to cover it all. What lube you use is going to be a big factor in how much you enjoy it; you want to use water-based only, to protect the material, and something long lasting, to avoid the need to apply more just as you’re about to climax, or worse, thrusting when its dried up, causing both chafing to yourself and fissures inside the sleeve. The experience is supposed to feel more realistic if you first heat up the insert to body temperature. The microwave is not suitable for this, and so it is recommended that you try submerging it in hot water. In my experience the insert did not absorb much heat from the water and it wasn’t worth the bother.

The Flight uses a clear “Ice” style insert, which I have to say I found to be a puzzling choice. I own both a  standard pink Fleshjack, and an Ice Jack, and the biggest difference between the two materials, is that the Ice material feels a little more delicate and becomes incredibly sticky when you wash it. The stickiness adds more maintenance time to the Ice Jack, but you tolerate it because the trade off is that you can see yourself inside it when using it. The Flight, however, has an opaque black case, which instantly cancels out the benefit of the material. The result is that you’re left with a product which unnecessarily requires you to invest more maintenance time. I will concede that the Flight does look good, with the frosted glass appearance of the Ice insert, contrasting against the sleek black case, but I really would have preferred that they had used a coloured insert instead. Maintenance is the number one complaint of every Fleshjack owner, so anything they could have done to reduce that would have been greatly appreciated. 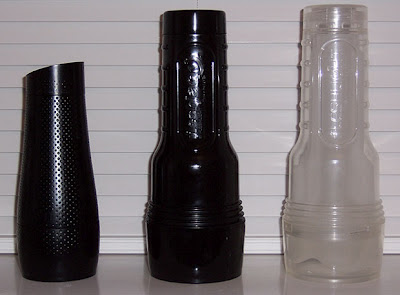 On the subject of maintenance, the Flight doesn’t come packaged with a protective plastic rod in the middle, so when you first get it the inside has a thin coating of powder, which you really want to wash out before using it. If you don’t, then as soon as you squirt lube in there it’s just going to form into a paste, which will end up stuck to places you’d rather it not be. I won’t go over maintenance too much again, as I’ve already mentioned it in my reviews of the Vortex, Ice Jack, and my Zen and the Art of FleshJack Maintenance how to guide. One thing I noticed about the Flight is that it did require less time to air dry than my other two FleshJacks, presumably because of its smaller size.

With proper care, Fleshjacks are manufactured to be very durable. Unlike other cheap masturbators which split and degrade over time, my Fleshjacks have remained in virtually the same condition they were on the day I acquired them.

I would recommend the FleshJack Flight to anyone without hesitation. It’s compact, easy to store, it looks great, and most importantly it feels fantastic. If you’re looking for a premium quality masturbator, then this is the one to go for, and even better, it’s cheaper than the standard models, so you’re getting all the features for less money. This is now number three in my collection, but I would have been supremely happy had it been my first.

The Flight is also available internationally directly from Fleshjack.