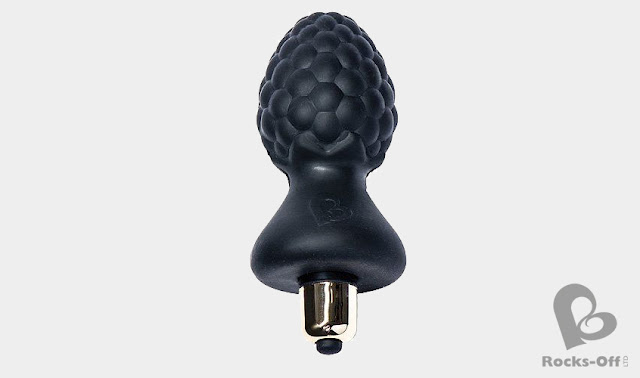 When I first caught site of the Blackberry I found its whole appearance to be irresistible, and I immediately knew that I had to have one. What could be cuter than a vibrating butt plug fashioned after a wild fruit?

When the product arrived I was very impressed by the overall appearance. The Blackberry came packaged inside a sturdy black cardboard box, with a clear plastic viewing window at the front. Inside the box the item is clipped securely into a plastic tray adorned with the company logo, which makes it the perfect place to store your toy when not in use, safely away from unwanted dust.
The plug itself is very attractive, closely mimicking the shape of a wild blackberry, with lots of nodules across the surface providing points of interest. There is one discreet mould line running around the length, but this is largely disguised by all the detailing.
The material used in the manufacturing is a type of silicone used in all Rocks Off products, which is completely odourless. I found this blend of silicone to be noticeably firmer than the silicone used in products by Tantus and Doc Johnson.
The plug is quite short, and also quite blunt, meaning you may wish to first loosen yourself up with something else prior to inserting it, if you’re not someone who regularly uses anal toys. I found that because of the blunt shape and the firm silicone, it wasn’t the most comfortable toy to insert, even when well lubed. Once inside, however, the compact shape made it made it quite pleasant to wear. Beneath the bulbous berry part of the plug is a rather short neck, the result of which is that a significant portion of the base seems to be pulled into the body when the muscles tighten down onto it. The base itself is one area where there may be a possible design flaw; it’s not very big at all, both in length and in that the diameter is only marginally less than the widest point on the berry part. This presents the real risk that if you’re not careful you could push too hard and lose the whole thing inside you. There also isn’t very much to grab onto when you’re trying to take it out after you’ve had enough.
The vibration is powered by the RO-80mm bullet, which can be removed and used separately if desired. The bullet is held in place very snuggly and can be difficult to extract without a lot of twisting, tugging, and wiggling, as the tight fit forms a vacuum inside. The entire toy is waterproof, so removing the bullet during routine washing isn’t a necessity. The vibrations produce a pleasant tingly feeling inside, but don’t travel too far due to the shape of the toy. I would have preferred a stronger sensation, as it feels as though a fair amount of the vibrations from the bullet are absorbed and dampened by the thick silicone body of the plug. Whilst wearing the plug I found the bullet a little difficult to operate, mainly because of how firmly the button needed to be pressed to switch it on and off. Unfortunately part of the bullet does protrude from the base of the plug, meaning you can’t sit down whilst wearing it, and the bullet does produce a level of noise which could be heard in a quiet room, in case you were considering wearing it in public.
Over all it’s a good product, especially to look at, but you get the impression that aesthetic considerations came before practical ones in some areas, which does let the toy down somewhat. For the amount of money it costs it’s a pretty nice item to have in your collection.
The Blackberry is available from SexToys.co.uk, and Honour
Tweet
Pin